One of the best loved features of the Steveston waterfront, Steveston Island, known as Shady Island to locals, is something rare in an urban landscape, an untouched, undeveloped piece of natural land. Home to rare species of plants and many types of birds, the island was little more than a sandbar as far back as the 1920s. Rivers are natural island builders and the Fraser would have formed the island on its own but the process was accelerated by the interference of man, leading to the treed sanctuary we see today.

In this image of the Steveston Waterfront from 1889 no island protects the waterfront. City of Richmond Archives, photograph # 2004 40 1.

In Steveston’s early days, a naturally formed sandbar protected the waterfront by diverting some of the river’s water away from shore. A natural, protected channel formed behind the bar, suitable for the moorage of fishing boats and the construction of canneries. 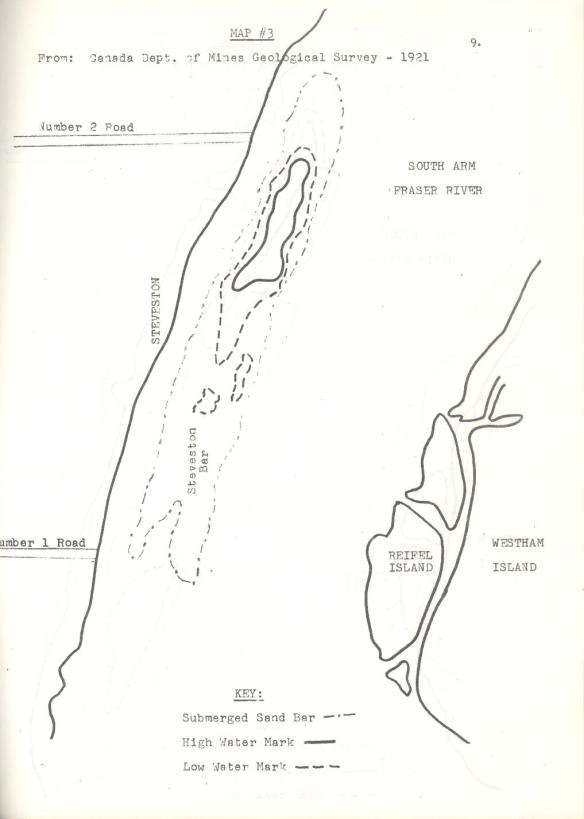 A 1921 map based on a Dept. of Mines geographical survey shows the natural shape of Steveston/Shady Island at the time. A small, permanently dry island near the end of No.2 Road existed, along with a couple of small bars that showed at low tide. A submerged bar extended as far as No.1 Road. City of Richmond Archives, Reference Files.

As European immigration increased, swelling New Westminster’s population and increasing the size and amount of traffic on the river, it was necessary to keep the main river channel navigable by regular dredging. Spoils from dredging were dumped on the Steveston bar forming two distinct parts which were exposed at low tide and were connected by the submerged part of the bar. At high tide, smaller boats could still be taken across that part of the bar, although the route became closed after further dredging and natural build-up closed the gap.

By 1947 the addition of wing dams and dredging spoils have begun the process of building the island we know today. City of Richmond Archives, Reference Files.

In the 1930s two wing dams were built on the south side of the island to keep sand from being washed back into the channel. Later, a long training wall was built just upstream. The effect of the wing dams and training wall were to divert the river’s water toward the main channel, increasing its rate of flow and helping to keep the channel clear. This also increased the rate of natural silt build-up on the island. The island now had an important function other than a place to deposit dredging spoils. It formed a well protected harbour along the Steveston waterfront.

The island before the installation of the rock dam or the breakwater. The western end of the island is still little more than a sandbar. City of Richmond Archives, photograph # 1977 1 14.

In order to to prevent the infill of the harbour channel and to provide access to the island for potential moorage facilities, a high rock dam was built across the upstream entrance to the channel. While the dam was effective, it eliminated flow through the channel, allowing effluent from the canneries to settle, creating a foul smelling basin that infiltrated the whole area with the stench of rotting fish. Within two years the top part of the dam was removed, allowing the channel to flush with each high tide. 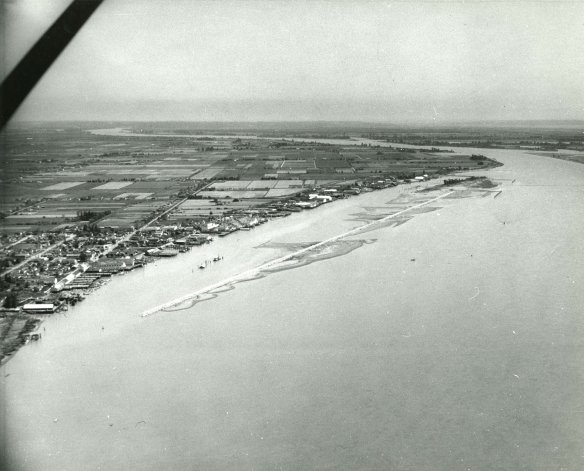 The rock breakwater can be seen in this image, shortly after its completion, ca. 1953. Also visible are the wing dams and the rock dam at the east end of the channel. City of Richmond Archives, photograph # 1977 1 15.

The island’s form was further changed when a long rock breakwater was built. It extends along the length of the island like a spine and gives it the geographical profile it has today.

This image looking west over Steveston Island, ca. 1976, shows the two wing dams on the left, the training wall at bottom and the rock dam at the entrance to the channel. The photo shows how water can flow through the channel at high tide, flushing clean water through while preventing silt from entering. The end of the rock breakwater, now mostly buried, can be seen extending past the western tip of the island. City of Richmond Archives, photograph # 1988 10 136.

Steveston Island today is a gem on the waterfront of the village. Having resisted development proposals that have arisen over the years, it remains undomesticated and accessible only at low tide across the rock dam, a fact that many people learn each year when they lose track of time and are stranded by the incoming tide. As other parts of Steveston and Richmond change under the pressure of development, let’s hope this little piece of man made nature remains the same.