The City of Richmond was incorporated in 1990 and by then it was already obvious that the 1957 City Hall, even with its additions and improvements, was becoming unsuitable for the rapidly growing city. Staff reports detailed the inadequacy of the office space and the inefficiencies of operation in the existing facility. Council and senior city staff identified issues with the existing building and began studies to determine what was needed to meet the city’s requirements for the foreseeable future.

In 1991 a Task Force was formed to explore the space requirements, cost benefits, and feasibility of the construction of a new City Hall. Many considerations were made regarding the construction of a new building over the modification of the existing one, the suitability of the location, and the design of a potential replacement. Detailed analysis found that the cost of upgrading the existing building would be at least 75% of the cost of a new facility. City owned and privately owned properties were considered as potential sites for a new hall but the location of the existing City Hall with its proximity to the School Board offices, RCMP Station and the new Cultural Centre, Senior’s Centre, Minoru Park, Arenas, and Brighouse Park, all fit in with the concept of a “Civic Centre” at the heart of Richmond’s City Centre. The Task Force also identified the opportunity to create an landmark building for the community.

After demolition of the old hall, site preparation and construction began. The under-building parking is a few feet below the water table and features a pump system to keep it dry. City of Richmond photograph.

By 1996 work on the project had progressed to the point where project management and architectural services, provided by KPMB Architects of Toronto, had been settled on. Mayor and Council formed a building committee and in 1997 city operations were moved from City Hall to another city owned property on Elmbridge Way to allow demolition of the old building to take place  and site preparation and construction of the new one to begin.

A public art project decorated the wall around the construction site on Granville Avenue. Two hundred plywood puzzle pieces were painted by more than 600 residents during the 1998 spring break at Lansdowne Park Mall. City of Richmond photograph.

The new building, unlike its predecessor, returned to the practice of the first two Town Halls, making space available for community events and public use. The award winning design featured four major building components.

In 1999 construction of the new City Hall was underway. City of Richmond Archives photograph.

The eight storey administrative tower includes the first floor “Front of House” area which clusters representatives from various City Departments in one area to provide one-stop-shopping and improve customer service.

The circular council chamber over looks the southern terrace water garden which features an island to represent Richmond’s status as an Island City and is landscaped with native plant species.

Looking over the Water Garden toward the Council Chambers in the background. City of Richmond photograph.

The light filled, two storey Meeting House wing houses a variety of open public spaces and multi-purpose rooms and offices and extends to the west of the tower.

The west terraces and civic square feature an outdoor stage, gardens, public art and access to the administrative tower and the Meeting House from the public parking area.

The West Terraces and Civic Square were an integral part of the O Zone during the 2010 Olympic Winter Games providing a large screen for watching events. Russ Bueker – City of Richmond Archives photograph.

The new Richmond City Hall was one of the first public buildings in the country to adopt the principles of Feng Shui in its design, consulting with a Feng Shui Master in the early planning stages of the project and throughout the construction phase. To quote Richmond Mayor Greg Halsey-Brandt who was in office for the duration of the project, ” Virtually every opening of a new building that I go to will have a Feng Shui master’s input. They do this all the time in the private sector because they are concerned about their customers, and the way I see it, we are no different. If we build a building that makes it uncomfortable for say, 20 per cent of our population, then that is not in the interest of the community we are trying to serve.”

The reconditioned Cenotaph was replaced within feet of where it was originally sited in 1922. City of Richmond photograph.

The building, which cost around $39 Million to build, is designed with the best available technology to withstand earthquakes, provides good public accessibility and an effective, pleasant and safe workplace for employees.

The new City Hall opened for business on May 15, 2000 and several celebratory events were held afterwards. On May 20 an Official Opening Ceremony took place. This was followed by a Charity Gala on May 26, attended by more than 1200 guests. On June 6 the cenotaph, which had been refurbished while in storage during the construction project, was rededicated. It was installed very close to its original location on No.3 Road near the main entrance to the building. On June 12 a Recognition Social was held, attended by more than 1000 residents who had lived in Richmond for 50 years or more. 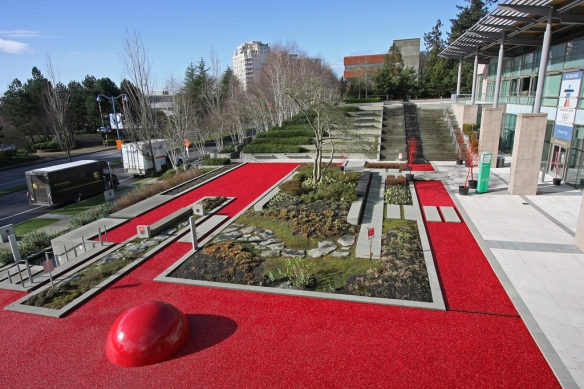 During the 2010 Olympic Winter Games the Water Garden at City Hall was filled with cranberries from the local harvest. Brian Phillips – City of Richmond Archives photograph 1_3824.

In the nearly 140 years since the opening of the first Richmond Town Hall, Richmond has grown dramatically, a trend which continues. The first hall served a population of 250 to 300 people at a time when Richmond could still be considered a frontier settlement. By 1919 when the second hall was opened, the population had soared to 3110. In 1957 the third hall was built to provide services for a community of around 26,000 people. The present City Hall was built when the population was around 150,000, a number which is estimated to have swelled to 222,945 today. With the growing service requirements needed to operate our expanding city, space has again become tight at the hall. Some city departments have moved from the main hall to the City Hall Annex, the former Public Safety building vacated by the RCMP in 2011, which has alleviated crowding for, so for the foreseeable future, our fourth City Hall will continue to serve as our Centre of Government.