On November 10, 1879, when Letters Patent were issued to incorporate the Corporation of the Township of Richmond at the request of 25 early settlers, the first order of business was to hold an election and form a council to run the fledgling municipality.  The election was held at the home of Hugh Boyd and Alexander Kilgour and, as required in the Letters Patent, a “Warden” and seven Councillors were elected. Hugh Boyd was the first Warden of Richmond, a title later replaced by Reeve and then Mayor.

Hugh Boyd, the first Warden of the Corporation of the township of Richmond. The first Council meetings were held in the dining room of his house on Sea Island. City of Richmond Archives,  Oil Painting by T. B. Walker, 1911.

Council meetings were held in the dining room of the Boyd house on Sea Island until a better venue could be provided. In October 1880, Council approved the purchase of a five-acre field from Sam Brighouse. The property was located on the Middle Arm of the Fraser River near the present day intersection of River Road and Cambie Road. Land not occupied by the Municipal buildings was to be rented out to a farmer to produce crops. The contract for building the new hall was awarded to James Turnbull who built it for $434. The building was completed on January 4, 1881 and a few weeks later the outhouse and woodshed were also finished.

The first function to take place at the brand new hall was a party to celebrate its completion. Guests were transported from New Westminster to the party on the steamboat Adelaide, there being too few men and even fewer women in Richmond at the time to make a proper observance.

The purchase of  property in that location was made based on an important fact about Richmond in those days. There was no infrastucture, –  no roads, minimal dyking done by private landowners and few trails. The location of the hall on the Middle Arm made arrival by boat convenient for many. In order to attend council meetings Councillor Walter Lee, who lived on the South Arm, would travel to Steveston by boat and then hike to the hall along the Crabapple Ridge. Travel overland was impossible in many areas due to the bog and gum boots were recommended even in the “dry” spots. Most Councillors carried slippers with them so they would have footwear during council meetings.

The new hall and the property it was built on became a centre of cultural activity for the community. Before long members of the Richmond Agricultural Society built an Agricultural Hall on the Municipal land near the Town Hall and many agricultural fairs were held there, starting in 1894. The Steveston Brass Band held concerts at the Town Hall, fraternal organizations booked the space to hold their meetings and it became a polling station for elections. Church services were held there and in 1881 permission was granted to the North Arm School Board to use the Hall as a school. Fourteen boys and twelve girls attended classes there with Miss Sweet as their teacher. 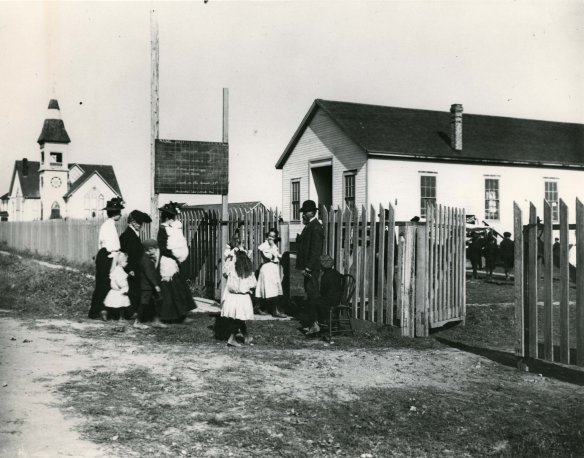 Richmond residents enter the gates to attend the agricultural fair, ca. 1910. The board at the gate shows the fees, Admittance – 25 cents, Children – 10 cents, Horse and Buggy (with driver) – 50 cents. Lunch was available on the grounds for 25 cents. On the right in this photo is the Agricultural/Community Hall and on the left is the Richmond Methodist Church, now Minoru Chapel. City of Richmond Archives photograph 1984 17 78.

In 1891 a new schoolhouse was built by the North Arm School District and the Methodist Church was built nearby, freeing the Town Hall from those duties. In 1905 the hall got its first telephone and in 1911 the heat from the wood stove was supplemented with the addition of an oil stove. By 1912 Council started discussing the need for a new hall in a location more suited to the Municipality, which by now had built many roads and was serviced by the BC Electric Railway’s Interurban Tram. 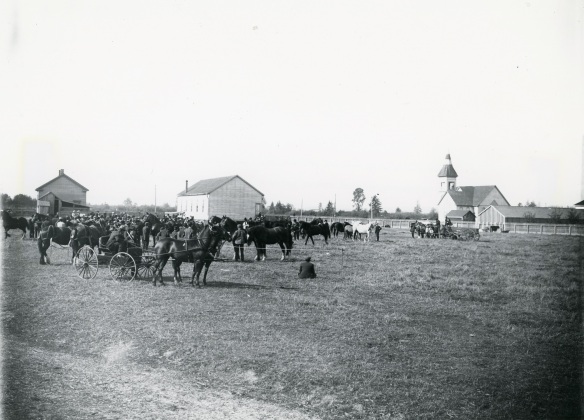 Horses and buggies and a crowd of people fill Richmond’s Municipal lands for an agricultural fair, ca. 1907. This image looks toward the present intersection of Cambie Road and River Road and shows the Town Hall (L), Agricultural Hall (M) and Richmond Methodist Church (R). The building in front of the church is the present location of the Richmond Rod and Gun Club. City of Richmond Archives photograph 1977 9 18.

The need for a new hall became more imperative in January 1913 when two auditors were going over documents in the hall. One of them, Mr. J.H. Lancaster, threw some gasoline into the wood stove thinking it was coal oil. The ensuing explosion caused the Town Hall to go up in flames. Mr. Lancaster was seriously burned and passed away some time later. The other auditor, Mr. J. Glanville  received less serious burns. Quick work by Reverend M. Wright and other bystanders resulted in most of the town’s records being saved.

The first Council Minutes for the Corporation of Richmond were saved from the disastrous fire that destroyed the Town Hall and appear to be scorched around the edges. City of Richmond Archives photograph.

The loss of Richmond’s Town Hall meant that a new venue needed to be found for council meetings. The Mayor and Council used Bridgeport School as a temporary location until a new hall could be built in a more suitable location. The start of World War One dictated that the school would continue to be Richmond’s centre of government until 1919.

Bridgeport School hosted Municipal Council meetings after the original Town Hall was burned in 1913. Shown here ca. 1940, the council met there until 1919.

Next: Part Two – The Move to Brighouse.