Since 1961 when the Historical and Museum Advisory Committee was formed, Richmond’s municipal government has been involved in identifying and preserving heritage sites in the community.

One of the first major heritage projects undertaken was in 1967, when the original Richmond United/Methodist Church building at the corner of River Road and Cambie was purchased by the municipality, moved to Minoru Park and renamed Minoru Chapel. 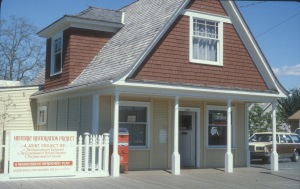 The acquisition and restoration of heritage buildings by the municipality continued in the 1970s and 1980s, with the Royal Bank (originally Northern Bank) in Steveston, London Farm, and the Britannia Shipyard being the most notable during this time.

Other important heritage preservation activities included the establishment of the Steveston Heritage Conservation Area and the development and preservation of Garry Point Park and Scotch Pond. 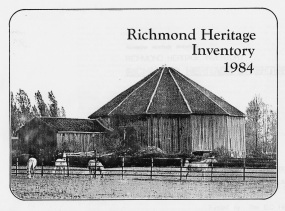 Cover of the first Heritage Inventory for Richmond, 1984. City of Richmond Archives GP 34

The establishment of a Heritage Advisory Committee by the municipality in 1984 marked the beginning of a formalized program for heritage preservation. That committee, later reconstituted as the Richmond Heritage Commission, conducted a number of important heritage studies, not the least of which was a formal Heritage Inventory for Richmond. The first inventory was published in 1984 and several updates have been made since.

The City of Richmond Archives has comprehensive records documenting heritage preservation activities in the community, dating back to the records of the Historical and Museum Advisory Committee and including minutes, research files, project files, studies and reports of the Heritage Advisory Committee/Heritage Commission. In addition, records of the Engineering Department and the Leisure Services Department document restoration, maintenance and programming activities at municipally-owned heritage sites. Records of the Planning Department, Law Department and Clerk’s Office provide an accurate picture of the process by which heritage properties were acquired, and how policies relating to non-City owned property of heritage significance have developed. 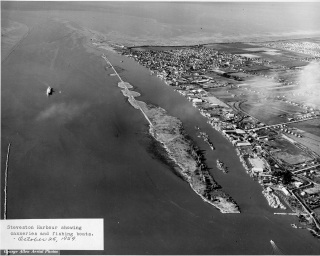 A recent addition to the holdings of the City of Richmond Archives is an album of aerial photographs taken from 1959 to 1962 showing industry on the South Arm of the Fraser River, at New Westminster, and on the Upper Fraser.

The album was created by the New Westminster Harbour Commission with aerial photographs taken by George Allen.

Images from 1959 depict Steveston Harbour and the wharves of what were Richmond’s three major industrial plants on the South Arm: Crown Zellerbach Paper Mill, Canada Rice Mills, and LaFarge Cement.

The photographs were taken in the same year that the Deas Island (George Massey) Tunnel was opened.

The 52 photographs in the album are among a larger number of images that have been recently scanned as part of the ongoing Archives digitization program.