In January 1955 the Municipal Building Committee recommended to Council that a new, two-storey Municipal Hall be built immediately behind the existing one on the Municipal property at Granville Avenue and No.3 Road. By February the plans had been broadened to include a school administration building and health services offices on the same site and approval to borrow $398,000 was given by Council. The architectural contract was awarded to Allen C. Smith and Associates, the construction contract to Narod Construction, heating and ventilation to Crombie Heating and the electrical contract to Canadian Comstock. 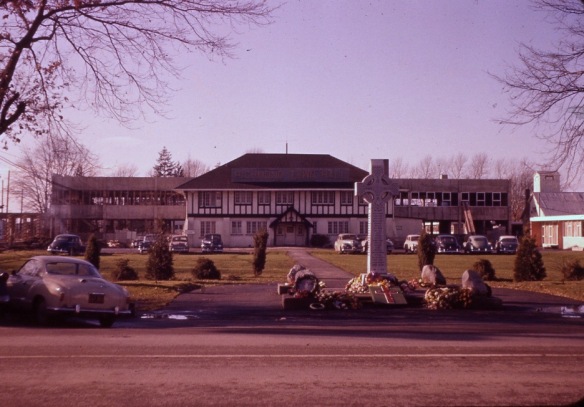 Construction of the new Town Hall takes place behind the old one in this photo. When the building was completed and the old one removed, the Cenotaph was relocated closer to the entrance. City of Richmond Archives photograph 1997 42 3 47.

Construction on the site began with moving the Brighouse Fire hall to the southwest corner of the property, making room for excavation to begin. The building’s construction was of reinforced concrete and throughout the construction, changes and amendments to the plans were made, although one suggestion that a neon sign to identify the hall should be added to the plans was quashed. The location of the new hall allowed work to continue uninterrupted in the old Town Hall while the new building rose behind it. 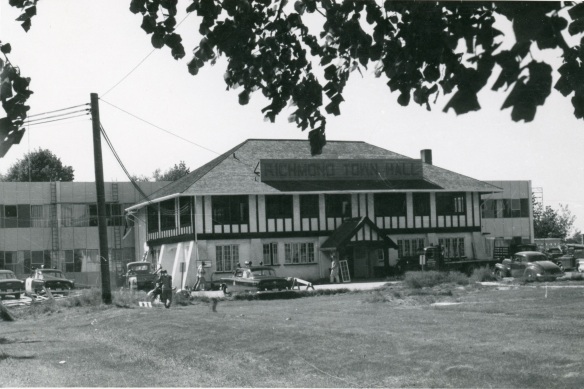 Work continues on the new Town Hall while business continues in the old one. City of Richmond Archives photograph 1985 7 14.

By May of 1957 the hall was ready for occupation and municipal departments began to move their operations into the new building. 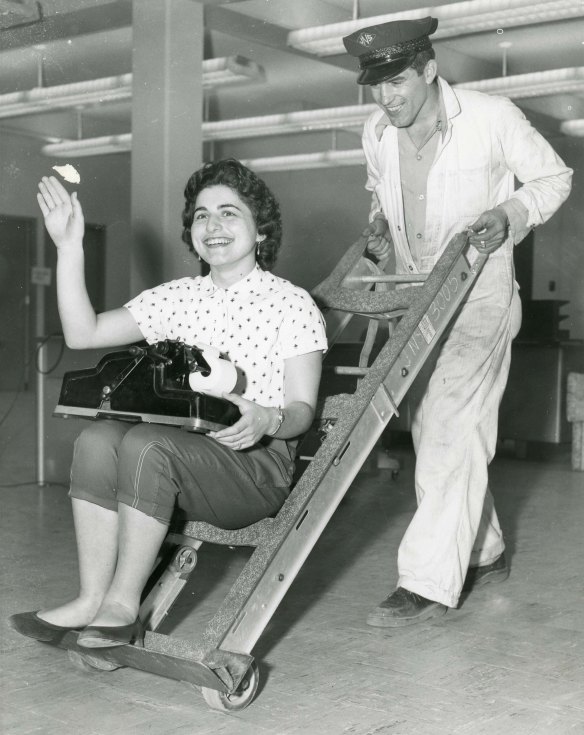 Municipal employee Nellie Grecan and her adding machine are moved into the new Town Hall on May 25, 1957. City of Richmond Archives photograph 1988 18 57.

The demolition of the old hall was started, and once complete, landscaping, paving of the parking area and relocation of the cenotaph was completed in time for the grand opening on August 9, 1957.

Once staff had moved into the new building, the old building was demolished. City of Richmond Archives photograph 1985 7 31.

The opening of the new Municipal Hall was attended by the the Hon. Wesley Black,  Minister of Municipal Affairs, and the Hon. Leslie Peterson, Minister of Education who opened the new School Board offices.

The crowd on the east plaza of the new Town Hall for the opening ceremonies, August 9, 1957. City of Richmond Archives photograph 1988 18 38.

The new hall departed from its predecessor’s use as community space and community activities moved to community centres, church halls and other buildings. It was an unpretentious office building designed to house the growing bureaucracy required for the rapidly growing town, one which was growing far faster than could have been imagined.

The new council chambers at the Municipal Hall with Reeve E.R. Parsons in the chair, Municipal Clerk Ted Youngberg seated below him and Councillor R.A. McMath in the foreground, Councillor H.D. Hudson seated on the far left, and Councillor Robert G Ransford at the far right. City of Richmond Archives photograph 1977 1 146.

Photograph of the general office and municipal employees in the new Richmond Municipal Hall, 1957. City of Richmond Archives photograph 1977 1 148.

By 1961 office space was growing tight in the four-year-old building and debate was taking place on expansion of the hall. In 1964 the decision was made to add a new wing to the building. A contract was awarded to L.D. Boyd construction for $166,900 and the new wing was completed in September 1965. This alleviated the space crisis for a few years but improvements and modernization continued through the rest of the 1960s. 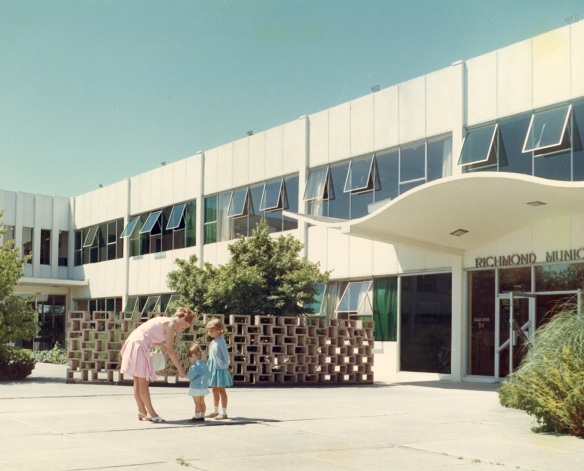 Growth continued and in 1969, with the hall once again bursting at the seams, plans were being debated for further expansion. In 1971 $1,278,000 was borrowed for the construction of a third floor on the existing building and for the construction of a new Public Safety Building. The new building would allow the RCMP to vacate their space in Municipal Hall and move to their own building, freeing up valuable office space. The additional space provided by the third floor and the space cleared by the RCMP only lasted a short time in the rapidly growing municipality.

This photo from 1979 shows the Municipal buildings complex. Municipal Hall, with the third floor and additions at each end is in the foreground. The old Brighouse Firehall is in the space between the Hall and the RCMP Building and the School District Offices. To the right foreground is the Post Office and in the mall parking lot is the Richmond Square Theatres. City of Richmond Archives photograph 1992 20 F.

By January 1978 an architect had been commissioned to produce a report on the state of the council chambers and offices and how to increase the efficiency of the use of space in the hall. This report led to changes in the Health Department, a new Personnel Department and an addition to the north end of the building in 1979.

In 1990 the Corporation of the Township of Richmond was reincorporated as the City of Richmond. Over the preceding decade Richmond’s growth had continued and accelerated with increasing immigration. Richmond’s old Town Hall’s days were numbered, the city once again outgrowing it’s office space.

Next: The Modern Tower.