One of the biggest mixed-use developments in Richmond’s history is now in the planning stage. It consists of a hotel and conference centre, as well as retail and entertainment amenities. If it goes ahead it will be located in the City Centre area, where the old bridge to Sea Island and Vancouver once stood. This site was used primarily as industrial land and is still known as Duck Island. The island however doesn’t exist anymore. It has physically merged with Lulu Island through infill, and so doesn’t show up on modern maps. If you have been to the Richmond Night Market next to the River Rock Casino you have been on the island. 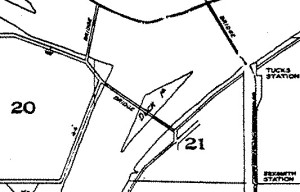 In anticipation of increased research on this site, the Archives has recently created a research guide, compiled by Friends of the Richmond Archives Director Christine McGilvray. The guide will assist researchers by listing and describing those textual, cartographic and photographic records held by the Archives which explain the progress of land use at this location.