The banner of the first Boeing Beam, published January 6, 1943.

Boeing Canada had been building aircraft in the Lower Mainland since 1929 when they bought the Hoffar-Beeching Shipyard at Coal Harbour and began building seaplanes there. The massive expansion of the aircraft industry that came with the start of the Second World War resulted in the construction of more facilities including the massive factory on Sea Island, built in 1942, as well as many other smaller shops in communities around BC. This expansion of Boeing Canada’s production came with a corresponding expansion of the workforce, providing thousands of jobs for men and women during the war years. 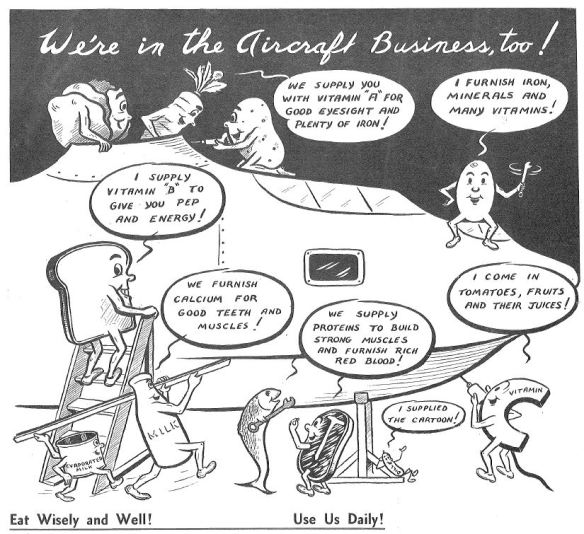 The importance of a nutritious diet for aircraft production workers is explored in this cartoon from Phil Dill. Boeing Beam image.

With the flood of new workers, the Boeing Canada Public Relations Department needed a method of communicating with their employees on a mass scale and so, on January 6, 1943, the first issue of the Boeing Beam was published. The Beam, was issued fortnightly (every two weeks) until August 31, 1945 when the war ended and wartime production ceased.

This New Year cartoon in the premier issue of the Beam was the first Dill cartoon to be featured. Image from the Boeing Beam.

Featured in the Boeing Beam were articles about the various plants and shops, information on training and production, stories about the aircraft produced at the plants, health and safety news as well as social news about employees, events and sports. Also featured in the Beam were the cartoons drawn by the Art Director of the Public Relations Dept., Phil Dill.

Phil Dill was a young man who was originally employed in the Expediting Department but was relocated to Public Relations due to his talent with pen and ink. His work, featuring the antics of character “Claude Hopper” , dealt mostly with worker safety but also covered other aspects of the culture at the plants.

Claude Hopper was the anti-hero of many of the Dill cartoons. The trademark pickle also appears in this early cartoon. Boeing Beam image.

The majority of the cartoons also featured his trademark pickle character, who often added commentary to the cartoons.

The dangers of rumour-mongering are covered in this cartoon. Boeing Beam image.

Mr. Dill also produced posters. He developed a system of glass fronted poster frames which were mounted in key locations in all the factories operated by Boeing Canada.

This image illustrates some of the posters created by Phil Dill. Boeing Beam image.

The posters, dealing with safety, security and production, were numbered and rotated through the plants, providing a constantly changing theme. 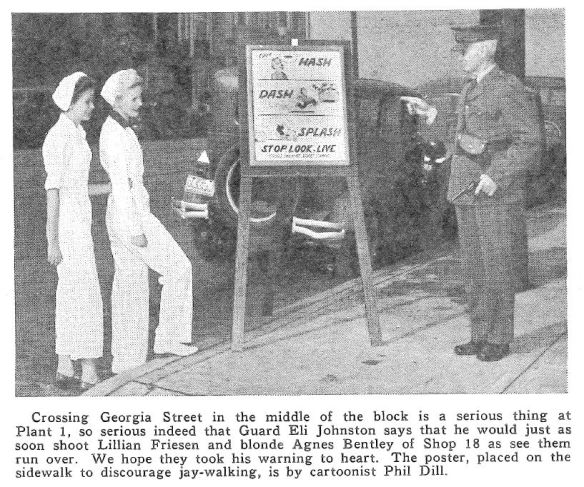 A Phil Dill safety poster warns workers of the hazards of crossing Georgia Street near Plant 1, as does the armed guard. Boeing Beam image.

As new problems cropped up, Dill would produce new posters to deal with the subject using a touch of humour.

A little humour goes a long way, as illustrated in this cartoon published during a bond drive. Boeing Beam image.

The poster campaign proved to be so effective that large aircraft manufacturers in California requested photos of the images so they could use them in their own facilities.

Dill’s work was acclaimed by National Safety Council as well as the US Navy Visual Aids departments and the Aircraft Industry Relations Committee.

The large female work force at the Boeing Plants was a new situation for male employees. Dill broached the subject with his usual humour. Boeing Beam image.

His cartoons and posters were put on public display at the Vancouver Art Gallery in December of 1943.

The dangers of unfettered long hair on female employees is addressed in this Dill cartoon. Boeing Beam image.

Subjects such as War Bond Drives, security and the relatively new experience of working in a mixed gender industrial workplace were also covered in Dill’s cartoons.

Working at an aircraft plant had its own set of unique hazards, as shown in this cartoon. Boeing Beam image.

After the Boeing Canada plant closed, Phil Dill found a new home for his cartoons in the pages of the “Buzzer”, the BC Electric’s transit publication.

The last Phil Dill cartoon to appear in the Boeing Beam was in final issue, August 31, 1945. Boeing Beam image.