British Columbia Packers Limited was at one time the largest and most diverse fishing company in Canada. For many years, the company operated out of headquarters in Steveston, a major centre for the British Columbia fishing industry for much of the last century.

Of the many brand names and trademarks owned by BC Packers, “Clover Leaf” was one of its most well established.

The brand was registered to be used for a wide-range of canned products, including fruits, vegetables, soups and fish. The Clover Leaf brand over time, however, became synonymous with quality seafood canned in Steveston and at other BC Packers canneries up and down the BC coast.

Clover Leaf Salmon, By Appointment to their Excellencies the Governor General and the Lady Tweedsmuir, 1939. City of Richmond Archives, BC Packers fonds, Series 5, Sub-series 1, File 17

BC Packers marketed its “Clover Leaf” salmon locally, throughout the British Empire, and around the world.  In the 1950s, its marketing campaigns often included displays at various exhibitions and shopping outlets, radio advertisements with catchy jingles, and the publication of pamphlets containing recipes for easy-to-make meals.

One pamphlet produced by BC Packers around 1955, “Sea Food Recipes”, was recently consulted at the Archives in the course of historical research on food preparation. In the interest of accurate research, we thought we should try one of the recipes, the “Salmon Bread Pie,” a kind of poor man’s Salmon Wellington. 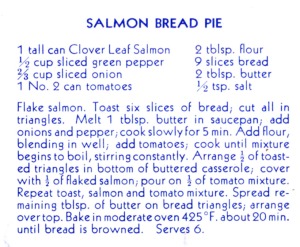 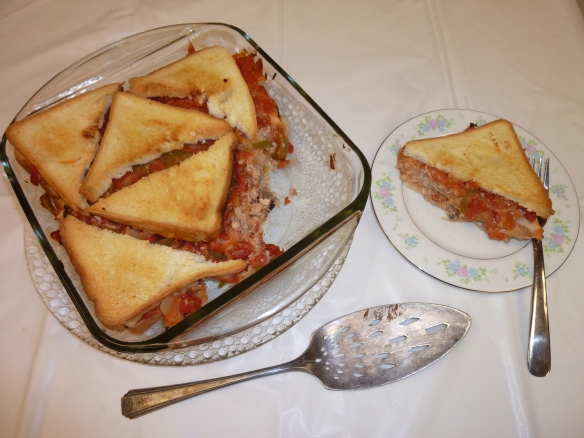 The surprisingly tasty result of our research , thanks to professional chef and Friends of the Richmond Archives’ Board Director Precilla Huang. (Bill Purver photograph)