Traffic congestion has been a major topic of conversation among Richmondites from the early age of motor cars to the present day.

Roads like No. 3 Road have always been problematic for traffic, witness Council minutes and resolutions like this: “Decision to place Danger Signs near the corner (curve) at the end of No. 3 Road on the River Road owing to two bad curves and congested traffic.” (June 25, 1923) 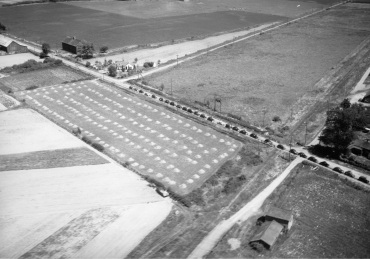 Richmond’s geographic location on islands in the Fraser River has always posed problems for traffic at river crossings.

Whether it be the ferry to Ladner or crossing the old Marpole and Fraser Street Bridges, bumper-to-bumper traffic was a normal component of a commuter’s day.

Traffic congestion on the Sea Island side of the Marpole Bridge, 1955. City of Richmond Archives Photograph 1997 42 3 145

Here’s an account by Grant Thompson of the Sea Island Heritage Society of the problem of crossing the Marpole Bridge at rush hour in the 1950s:

“One of the results of these traffic jams was that both Lancaster Cres. and Catalina Cres. were turned into one-way streets south bound. During rush hour many drivers would race north down either street and then try to cut back onto Miller in the case of Catalina or back onto “Airport Highway” at the north end of Lancaster. Barricades blocked access to Miller Road at Wellington Cres. and at the lane on the east side of Sea Island School. Add to this the traffic from the Airforce Base on Miller Road and the traffic from Cora Brown on Grauer Road turning left onto the Bridge and you had one big mess coming from Sea Island.  Also contributing to this back up was traffic heading to the Lansdowne Race Track which backed up in old Marpole and also the traffic making a left turn cutting across the Air Port Highway to use the Bridgeport bridge and traffic coming from the west from Lulu Island merging onto the Marpole Bridge in front of Grauer’s store. Add to this the opening of the Marpole Bridge for boat traffic which happened often depending on which way the tide in the river was going. It was quite often 8 o’clock in the evening before the traffic eased off. The odd configuration of the street intersection didn’t help matters in Marpole. During these back-ups there were two Vancouver policemen detailed to directing traffic in Marpole. The parking lot at the ANAF club was always full; people would stop and have a few beer and wait out the rush hour. In fact it was much faster to walk the mile from Burkeville, go to the show at the Marpole Theater and catch the bus home after the movie. The Fraser Bridge was not much better as it also backed up for many of the same reasons.”

Modern transportation and traffic planning and the return of commuter rail to Richmond with the Canada Line have alleviated some of the earlier traffic nightmares.  Traffic congestion and its associated problems, however, still remain a major challenge for Richmond and other municipalities in the Lower Mainland.