Part of an ongoing program to digitize historical images at the City of Richmond Archives are 980 slides taken by Richmond’s Engineering Department documenting a variety of major infrastructure projects in the municipality between 1969 and 1977. Highlighted here are just two projects from 1969: the construction of the Dinsmore Bridge and the Gilbert Trunk Sewer.

Before the opening of the bridge in 1969, the only connection between Sea Island and Lulu Island was the Moray Channel Bridge, built in 1957 to replace the old Middle Arm span of the Marpole Bridge. While the Dinsmore Bridge itself was built with funding from the Federal government, the approaches to the new bridge connecting Gilbert Road to Russ Baker Way were the responsibility of the municipal government. Part of the construction of the bridge approaches required the crossing of some of Richmond’s existing infrastructure, such as the Lansdowne Canal, as shown below.

Construction of the Crossing for Lansdowne Canal from the Dinsmore Bridge. (City of Richmond Archives Photograph 1988 123 472)

Another major construction project in 1969 was the Gilbert Road Trunk sewer, designed to collect sewage from lateral feeder pipes extending east and west to transport raw sewage south to an outfall in the South Arm of the Fraser.

The new sewage system was designed to replace an older patchwork of collectors and outfalls. Today, the Gilbert Road Trunk Sewer No. 2, a parallel system,  is under construction by Metro Vancouver.

Before 1973, when the Lulu Island Wastewater Treatment Plant at the south end of Gilbert Road became operational, the pipe discharged untreated sewage directly into the south arm of the Fraser River near the foot of Gilbert Road.

The Placement of the Gilbert Road Sewer Outfall at the South Arm. (City of Richmond Archives Photograph 1988 123 401)

Other Engineering Department activities documented by the recently-digitized group of photographs include dyking and drainage projects, traffic and intersection studies, and aerial surveying of fire halls, municipal buildings and parks and recreation areas.

Imagine yourself in the kitchen of the farmhouse at London Farm in the early part of the last century, thinking about a nice treat for your cook to bake for the family. You go through your favourite cookbook and voila, you find a healthy, yet simple recipe for hermit cookies.

Cover of “Woman’s Favorite Cook Book,” published in 1902 and used by the London family. City of Richmond Archives reference files

This is what Hetty London, wife of pioneer farmer Charles London, might have done using her “Woman’s Favorite Cook Book”, published in 1902, and found with old records of the London family now in the holdings of the City of Richmond Archives. 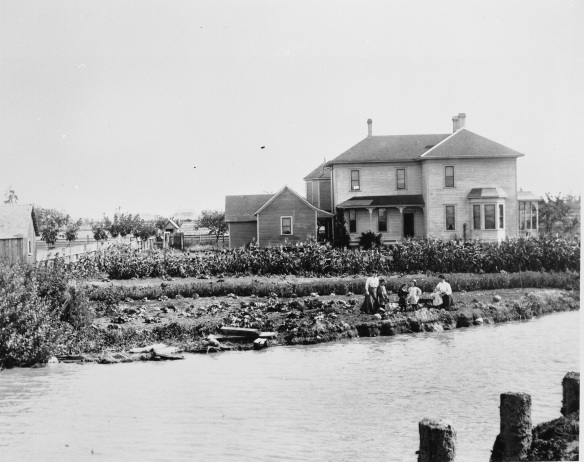 Charles London and his brother William purchased land in the South Arm district of Richmond in the 1880s, the area taking on the name of “London”. After their marriage, Charles and his wife Henrietta (Hetty) built their farmhouse, where they raised a family of eight children (three of whom died as infants.)  In 1978, the farmhouse was designated as a heritage site and the next year was purchased by the municipality to be restored as a heritage property.

London Farmhouse after restoration by the municipality. City of Richmond Archives Photograph 2009 16 13-4-3-1

The recipe for “hermits” found in Mrs. London’s old cookbook was particularly appealing to Precilla Huang, professional pastry chef and Board member of the Friends of the Richmond Archives, because it represented simpler times and the use of wholesome ingredients.

The result of Precilla’s baking was a tasty drop cookie, not too sweet but rich with buttermilk and lightly spiced with a hint of nutmeg.

A plate of hermit cookies hot out of the oven. (John Campbell photograph)

Imagine the fragrance of the batch of cookies coming out of the oven, and the enjoyment they would have brought to the London family and guests.