Richmond has had four distinct policing regimes, each documented in records held at the Archives: police constables appointed by Council, a small force regulated by a Board, the BC Provincial Police and lastly the RCMP.

The earliest police force consisted of a constable or constables appointed and administered by Town Council. An overview of this early development can be had by reading Council minutes and reports to Council from that period.  Other municipal records and reference material in the Archives provide reference for important events involving the police, including the murder of Chief of Police Alexander Main in 1900.

The oversight of policing activities was enhanced by the creation of two bodies separate from Council. The Board of Licence Commissioners was established in 1889 with the power to licence and inspect establishments such as hotels and saloons serving liquor.  Enforcement activities relating to this licensing were carried out by police constables. The Archives holds the minutes of the Board from 1894 to 1917, which tell a colourful if partial tale of Richmond’s early night life. 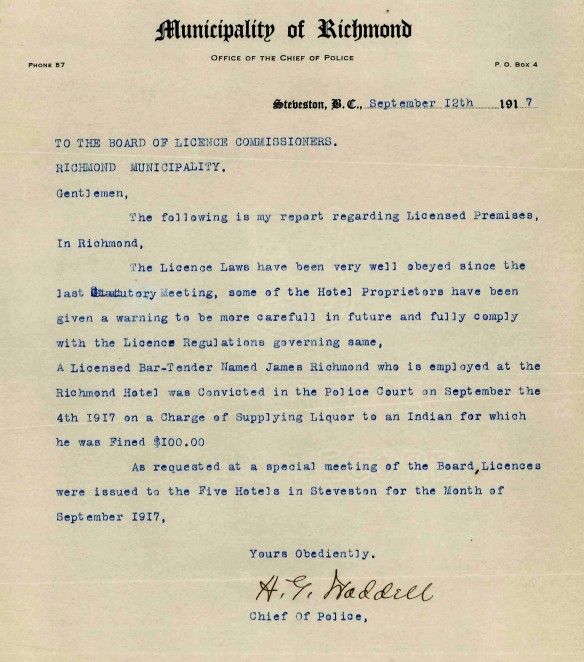 Report to the Board of Licence Commissioners, September, 1917. City of Richmond Archives MR 403, File BLC 1-1

In 1915, Council established the Board of Police Commissioners to appoint and manage the police force. Chaired by the Reeve, the Board carried out a variety of administrative functions and received reports from the Chief of Police on crime and police actions and complaints from citizens with regard to law and order and police conduct. The Archives holds the largely hand-written minutes of this Board for most of its existence, until its dissolution in 1941.

First page of Annual Report to the Board of Police Commissioners, 1916. City of Richmond Archives MR 404, File BPC 1-1

In November 1940 Council decided to hand over local policing to the BC Provincial Police. Although this decision marked the end of Richmond’s own police force, the story of policing in the municipality continues in other records held by the Archives.

Municipal records series 42 (1914-1988) includes a wide range of records created or received by the City concerning policing activities and services, and justice issues. Files in this series include monthly reports from the local detachment of the Provincial Police (1941-1950), as well as various reports from the RCMP from the time it took over municipal policing in Richmond in August, 1950.