Lulu Island was the location of many of BC’s pioneering aviation milestones but since the opening of the Vancouver Airport and Seaplane base on Sea Island on July 22, 1931 the majority of Richmond’s aviation activity has taken place there.

One exception to this was Wells Air Harbour, a seaplane base and repair facility on the Lulu Island side of the middle arm. The facility was built by Air Land Manufacturing and started operations in 1929, becoming an important base for seaplane operations. It became generally known by the name of its operator, Hunter Wells, during the early 1930s. 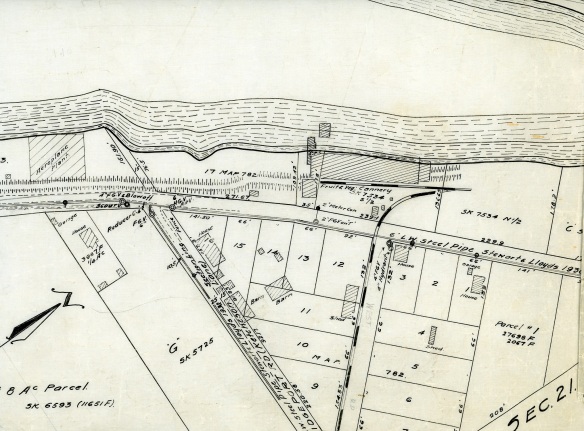 This waterworks map from the late 1930s shows the Wells Air Harbour building, labelled “Aeroplane Plant”, on the upper left, just south of the end of Bridgeport Road. (City of Richmond Archives map – Sea Island and No.3 Road Water Linens)

The business was located on River Road near the present end of Bridgeport Road, easily accessible from Vancouver via the Marpole Bridge. Aircraft that landed on the Middle Arm could moor at the terminal’s floats or, if in need of repairs, could be hauled up the ramp into the hangar.

Bush pilot Ginger Coote operated his airline out of Wells Air Harbour. Shown here is his Waco YKS-6 in a hangar. (City of Richmond Archives photo 1985 1 21)

The Harbour was the base of operations for many aviation companies. Wells Air Transport, Alaska-Washington Airways of BC, Commercial Airways and Canadian Airways all used the facility. Ginger Coote Airways, run by legendary bush pilot Russell L. “Ginger” Coote also used the base. Coote was a WWI fighter pilot and after the war personified the image of the daring bush pilot.

Russel L. “Ginger” Coote, in the pilot’s uniform, stands on the float at Wells Air Harbour, ca. 1935. In the right foreground is the ramp to the hangar where Tommy Jones repaired and rebuilt aircraft. (City of Richmond Archives photo 2012 12 1)

Tommy Jones ran a profitable aircraft overhaul and repair business at the Air Harbour as well. Many of the classic seaplanes were serviced there, with work from regular maintenance to complete overhauls taking place. It was not unusual to see groups of women at the repair shop stitching and fitting fabric to the wings and fuselages of various aircraft. 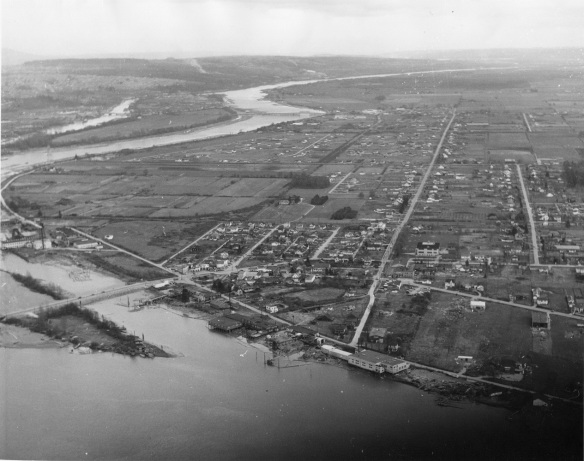 This aerial view shows the former Wells Air Harbour hangar building at the end of Bridgeport Road in 1953 with the ramp used to haul aircraft into the hangar removed. The building has seen many uses over the years, from an aluminum factory to a restaurant, and survives to this day. (City of Richmond Archives photo 1977 1 99)

Wells Air Harbour and Jones’ repair business closed as better facilities became available around the Lower Mainland with the onset of WWII. The hangar building is still standing, tucked between the two bridges to YVR, and for many years has been home to the Richmond Boathouse Restaurant.

A Google Street View capture shows the Boathouse – West Marine location on River Road. The large hangar door openings can still be seen, a leftover from the days when this building was one of the busiest seaplane bases in the Lower Mainland. Infill has separated the building from the Middle Arm and provided a parking lot.