Grauer’s Store was a Richmond institution which had a history going back to pioneer days and the development of the community of Eburne, built along the banks of the North Arm of the Fraser River. Located on the northwest corner of Sea Island and across the river in Vancouver, Eburne was serviced by businesses on both sides of the bridge that connected the two halves of the community and provided the only road access to Richmond and the village of Steveston. 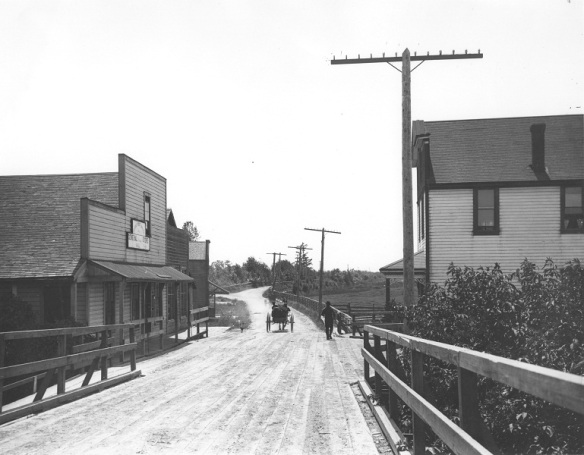 Eburne on Sea Island, ca. 1906. The post Office, General Store and butcher shop are on the left in this photo, taken from the end of the Eburne Bridge. (City of Richmond Archives photograph 1977 2 34)

Harry Eburne, who gave his name to the community, opened a general store and post office on Sea Island which he sold in 1898 to Churchill and McKay. In 1894 Jacob Grauer and his wife Marie opened a butcher shop near the store and ran it until 1910, when it was sold to Pat Burns & Co. who operated it as part of a chain of butcher shops. The Burns company moved their operation across the bridge in 1911 to the part of Eburne which would rename itself Marpole in 1916.

When Burns moved in 1911 the property was purchased by the Grauer’s son, R.M. “Rudy” Grauer, who expanded and developed it into “the largest independent business in the Fraser Valley”. 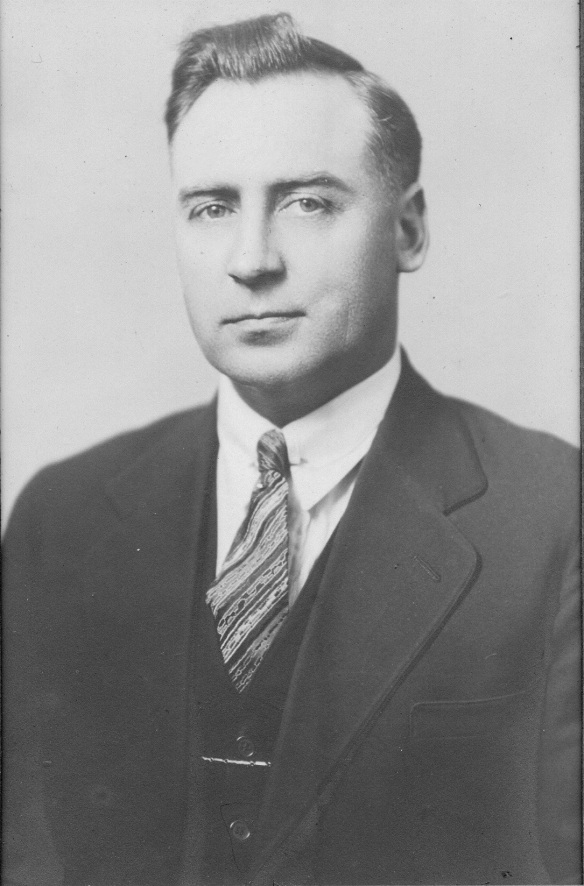 Rudy Grauer’s Store was one of those nostalgic things from our more rural past, a place where locals would drop by to stand around the stove and hear the latest gossip, talk about agriculture, the weather, politics, sports or whatever, early networking at its best. A true General Store, it carried all the goods that anyone might need. As reported in the May 26, 1951 Vancouver Sun, “It is virtually a department store on one floor. The stock includes hardware, dry goods, groceries, meats and produce. On one floor you can purchase lamb chops or a garden tractor, corn flakes or a refrigerator, cow medicine or rubber boots.” 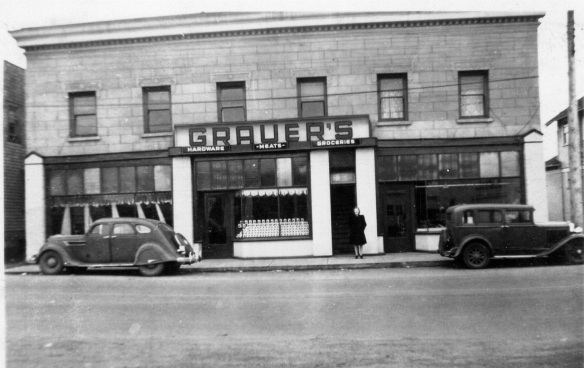 Mr. Grauer was very involved in community life. He served as President of the Richmond Agricultural and Industrial Society, President of the BC Amateur Lacrosse League, Richmond School Board and was the longest serving Reeve of Richmond from 1930 to 1949, through the Depression and World War 2. He retired from the store in the late 1940s, leaving his sons, Lester and Carl to carry on with the business, Lester in charge of produce and groceries and Carl in charge of hardware and meats.

Lester Grauer, left, and Carl Grauer, right, took over the operation of the store after their father’s retirement and ran it until it closed. (City of Richmond Archives photograph 2008 34 6 92)

The store had a diverse customer base. Local householders, farmers and business owners could drop in to shop, or phone their orders in and have them delivered. The Grauer property included a water lot and wharf where fish boats could stop and stock up before heading off to the next opening up the coast. Tugs would often call in their orders by radio-telephone while towing booms or barges toward the North Arm, their supplies ready for pick up when they were heading back out.

The Grauer property on Sea Island was slightly over one acre in size and included a water lot and dock. Several buildings were on the property, including the old Grauer family home, later converted to two rental suites, the store building, which had four rental suites on the second floor, the old post office/print shop building, which had two rental suites on the second floor, a small building used as a meeting hall and numerous sheds and storage buildings. (City of Richmond Archives accession 2008 34)

The Grauers estimated that during the store’s peak, 75-85% of business was carried out over the telephone. Customers could phone their order in to one of the store’s three telephones where a clerk would take the information and go to work filling the request at a special counter at the rear of the store. 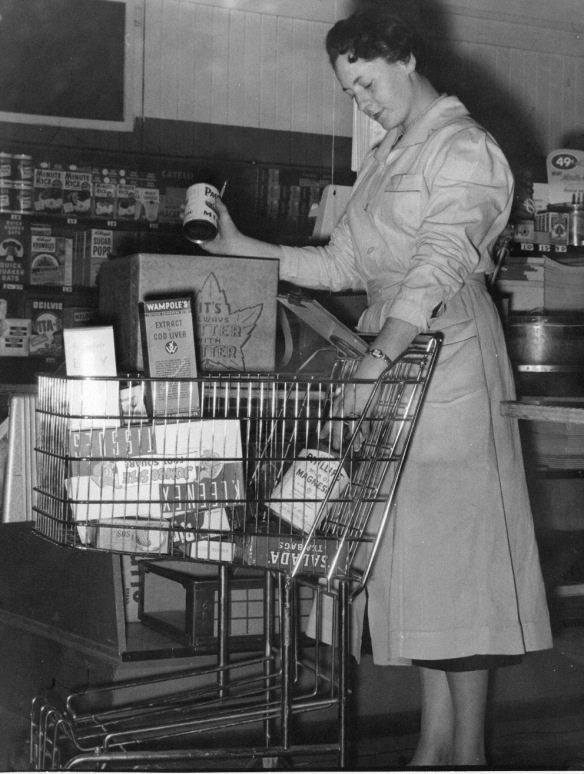 The order would be packaged up and, if for delivery to nearby areas, would be delivered the same day by one of the Grauer’s fleet of three delivery trucks. 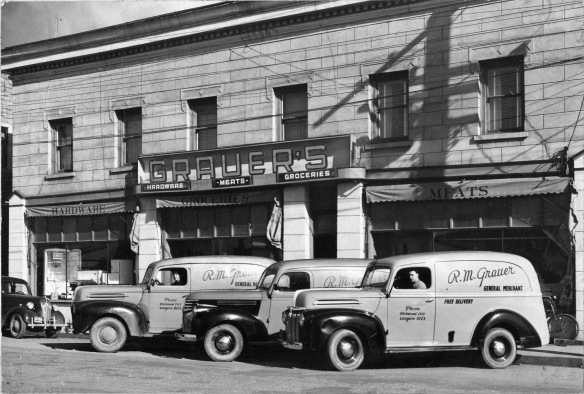 Deliveries to more distant locations would be done according to a scheduled route. The store carried a staff of 14 , including salesclerks and delivery drivers. Many were long term employees.

An advertisement for Grauer’s Store with the grocery delivery schedule. (City of Richmond Archives accession 2008 34)

Pressures started gathering against the store’s business in the 1950s when the Federal Government began the expropriation of land on Sea Island for the expansion of the airport. Quoting Carl Grauer in a March 1972 Vancouver Province article, “Every time they took a house they took one of our customers.” Their losses were gradual, but after the Oak Street Bridge was opened in 1957, the tolls on that bridge shifted drivers toward the old Marpole Bridge. In response, the Provincial Government shut the old bridge down. 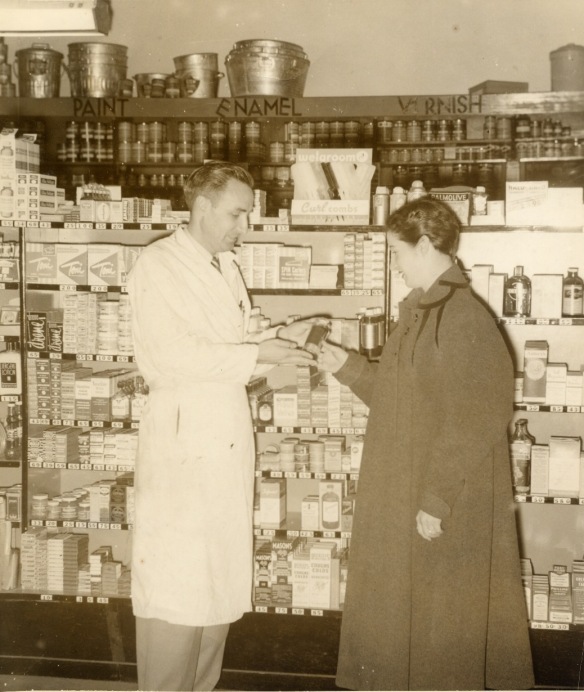 “People kept on using the old Hudson Street Bridge,” said Les Grauer, “because they didn’t have to pay the toll. So Gaglardi had to get that bridge out of the way, and he did. Right away, our business dropped off two-thirds.”

The brothers complaints to the government about the Marpole Bridge closure fell on deaf ears for the most part, and hopes for a fair expropriation deal from the Federal Government were not forthcoming. In the early 1960s a deal was almost struck to sell their property to a developer who wanted to build a large hotel on the site. That deal was quashed by the Ministry of Transport. According to Carl, the Ministry of Transport was against it. It said that the pilots objected to a hotel at that point, since it would be in line with a proposed runway.

The back of Grauer’s Store in 1967. Four rental suites were located on the top floor of the building. (City of Richmond Archives photograph 2008 34 6 84)

In the 1970s the final blow came with the construction of the Arthur Laing Bridge. Isolated behind the bridge construction while the vibration from the pile drivers knocked stock off the shelves, broke windows, shook holes in the plaster and bricks from the chimney, business evaporated. Tenants in the other buildings on the property left because of the noise. Finally on May 31, 1976 the Grauer brothers were forced to close the failing old store.

This photo from 1977 shows the last remnants of old Eburne, lying in the shadow of the Arthur Laing Bridge which opened the year before. The two large commercial buildings are the old Post Office / Print shop building on the left and Grauer’s Store on the right. Rental units were located on the upper floors of these buildings as well as in the house to the right. (City of Richmond Archives photo 1997 42 1 258)

Once work on the bridge was finished some of the rental buildings on their property were rented for a time but finally the Grauers sold the  property to the North Fraser Harbour Commission and on January 13, 1981 the store and the other buildings on the property were demolished. A plaque at the Harbour Commission’s building commemorates the site of the Grauer Family Home and R.M. Grauer Stores, 1895 – 1980.

An image taken through the front window of Grauer’s Store just before it was demolished in 1981. (City of Richmond Archives photograph 1988 121-Richmond Review- Jan.14)