In 1936 the Township of Richmond assumed control of dyking and drainage activities within its boundaries by amalgamating its own works established by by-law with those of two other existing authorities: the New Lulu Island Slough Dyking District (NLISDD) and the Lulu Island West Dyking District (LIWDD). 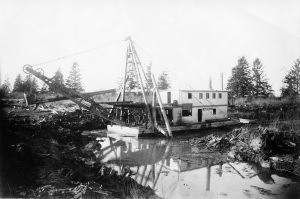 These two bodies had been established by petition of landowners to the provincial legislature: the NLISDD in 1900 encompassing the slough complex from Francis Road south; the LIWDD in 1905 largely encompassing the area west of No. 3 Road. Commissioners elected to administer these districts were responsible for appointing an engineer who drew up technical plans and assessments of the land benefited.

The City of Richmond Archives holds a wide assortment of records of these two bodies including minutes, assessment rolls, petitions and correspondence. Many provide details of an evolving landscape, where drainage of land and protection from periodic flooding was crucial to the success of farming activities.

Because the land was taxed by these bodies to pay for works, there were detailed records kept of land valuation and plentiful communication between the commissioners and landowners, including minutes of courts of revision. The records provide a vivid picture of early agricultural land use and the transition from private to public dyking.

In addition, Council minutes and bylaws, along with early records of the Board of Works, provide evidence of other dyking and drainage activities in the municipality, as well as of works after the dyking districts were amalgamated with the municipal government.